Ground-based particle accelerators, such as those used in the LHC, are being upgraded to reach higher centre of mass energies in colliders. Improvements are being made on the quality of superconducting radiofrequency cavities (SRF) [1], while at the same time novel accelerator technologies such as wakefield accelerators [2] are gaining more attention for their potential to achieve high-gradient acceleration. However, whether it is a 100 MV/m gradient from the conventionally used SRFs, or multi-GV/m gradient from wakefield accelerators, the fundamental limit on the highest achievable energy is the size and associated cost of building a collider using these accelerators. So, a fun question to ask is: can we utilize the size of the universe to accelerate particles? Or does nature provide similar acceleration mechanisms that can result in the high-energies cosmic events we observe on Earth? The answer is it just might, and we turn to astrophysical phenomenology for what possible processes could happen in the universe.

UHECRs are highly energetic subatomic particles with energies > 1EeV (1018eV). They can travel a long way from somewhere in the universe to Earth, producing cosmic showers while passing through the Earth’s atmosphere (see Max’s article on air showers here: https://mcdonaldinstitute.ca/apbites/2019-05-08-universal-air-showers/), and be observed in detectors on Earth. Several observations of such particles have been made in IceCube [3],the Fermi Large Area Telescopes [4] and various other detectors. The highest energy particle observed is 320 EeV [5].Through 5 years of data taking, the Telescope Array collaboration has observed an anisotropy in the northern sky where 19 events were detected when 4.5 events were expected [6].

The questions are: where could they have come from and how did they reach such high energies? In this post, I will cover three papers that propose formation mechanisms for these puzzling UHECRs.

One postulate is that these UHECRs can be produced by the first or second-order Fermi mechanisms. Fermi’s original idea, shown in Article 1, is the acceleration of particles via scattering in magnetized clouds. The magnetic fields in between the clouds dictate the particle’s movements. As the particle moves towards one of the clouds, it gets deflected due to the magnetic mirror effect, and the change in the particle’s energy in each deflection is proportional to v*V, where v is the particle velocity and V is the velocity of the magnetized cloud (Figure 1).

Figure 1: Particles scatter off magnetized clouds (left) due to the magnetic mirror effect (right). The magnetic mirror works such that the particles are reflected as the fields become denser (you can convince yourself that the net force acting on the particle as they enter the denser field will indeed reflect them back using the right-hand rule!). Source: Wikipedia

Therefore, the particle gets accelerated while moving in between the magnetic clouds. However, the particle will only get deflected if their velocity is below a limit while approaching the cloud (magnetic confinement), otherwise they escape out into the universe.

Another mechanism (first order Fermi mechanism, aka diffusive shock acceleration) was later proposed in Article 2, which was based on Fermi’s original mechanism, with the idea that the “reflections” provided by the interstellar clouds are mediated by plasma on either sides of the shock front. These shocks are usually the by-product of supernovae. In simple terms, imagine the plasma velocity downstream of the shock is u2 while the velocity upstream is u1, with u1>u2 (all velocities have isotropic distributions). In the rest frame of the old medium (downstream or upstream), as the particles cross the shock, they “collide” with plasma in the other medium, and gain energy in the order of u1/c. This is shown in Figure 2, below. 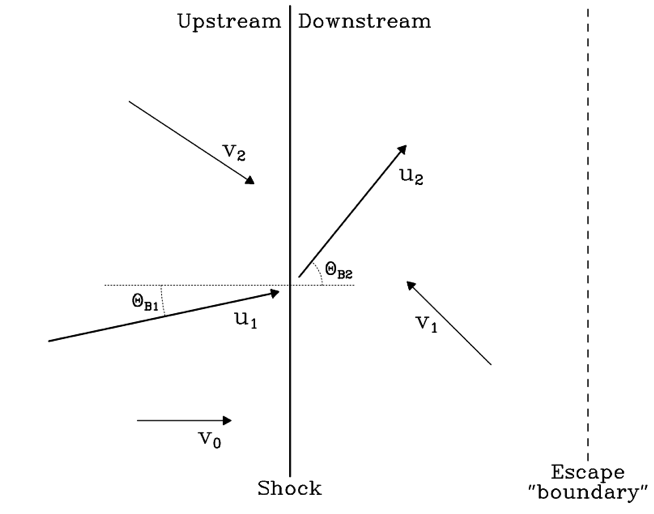 In Article 3, the authors postulate a mechanism that they claim to be superior to the fermi mechanism for the following reasons:

The relativistic Alfven wave drives a wakefield (a strong electromagnetic field produced due to polarization of charges in plasma) that dissipates at a large distance. Charged particles ride this wake and gain energy extracted from the Alfven waves (the Alfven waves are effectively transferring energy to the particles being accelerated). This is shown in Figure 3 below. The maximum energy gain is then dependent on the conditions of the accreting black hole (shown in Equation 66 in the paper). 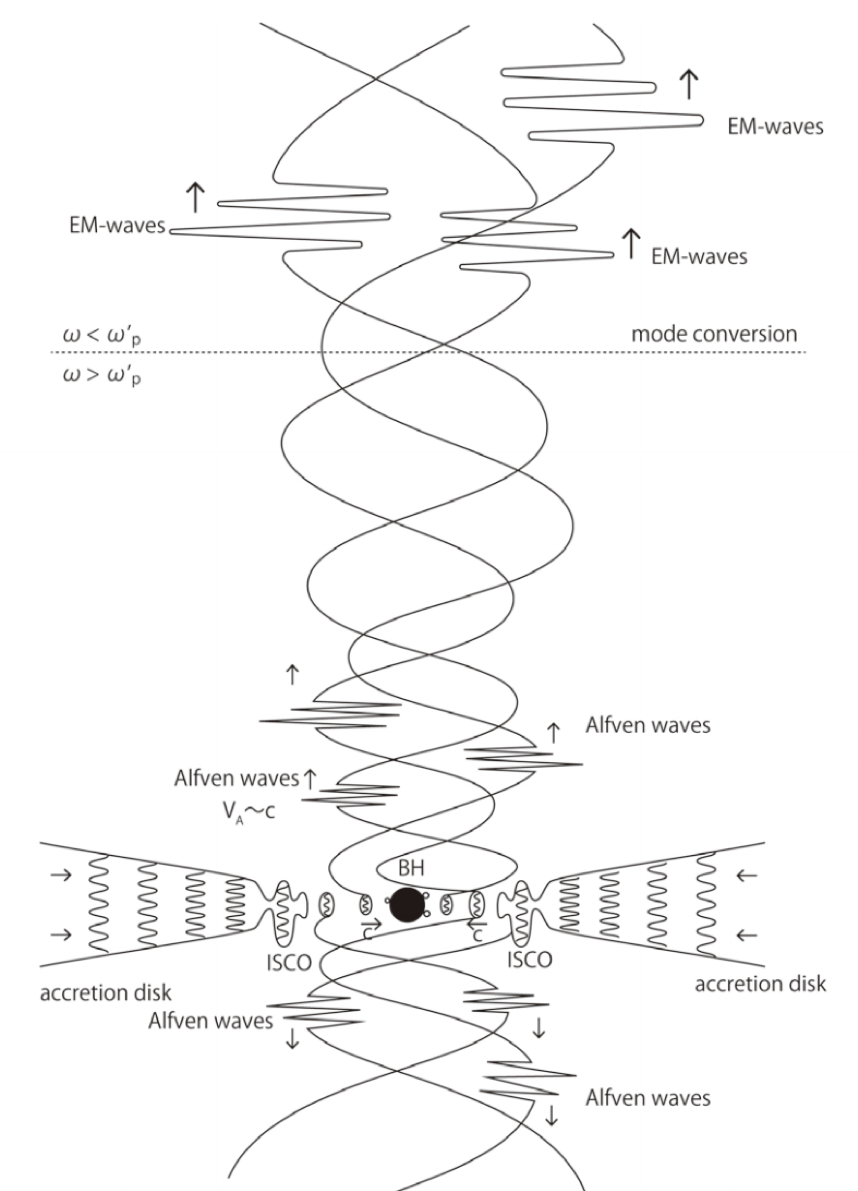 Figure 3: Alfven wave generation shown in Article 3. The action starts at the BH in the centre of the graph, and the inner-most accretion disk undergoes magnetic state transitions, which excites the Alfven waves that travel in all directions.

To explain the origin of the UCHERs, the authors have also identified a possible source for the northern hotspot observed — an intermediate mass black hole (100-1300 solar masses) in the M82 galaxy. They claim the gamma flux detected in the direction of the source in M82 and the deflection angle are consistent with observations if such acceleration did occur. According to Figure 4, this source possesses the right mass and luminosity to be able to accelerate particles to up to the 1020 eV regime.

Whether you believe in these mechanisms or not is your choice – the community has yet to reach a consensus for the origin of these UHECRs. Food for thought: we have been working on technological advances in colliders on Earth for a few decades, yet the processes/particle we are looking for may be spontaneously produced in the universe all the time. What’s our next step then: A larger collider on Earth? Scaling up detectors on Earth? More advanced telescopes in space? Most likely a combination of these, and many opportunities in theoretical postulations as well as technological and experimental developments await. 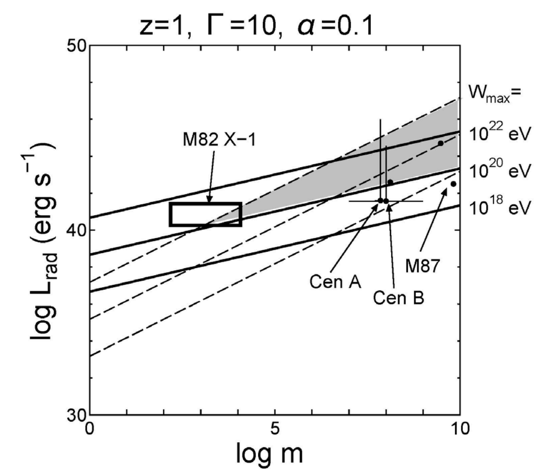 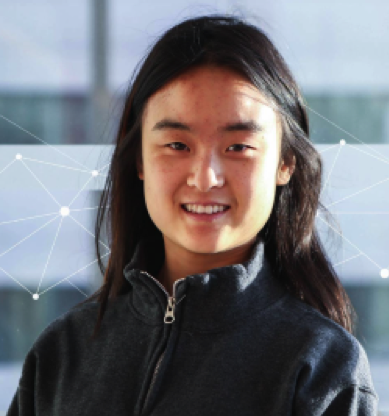 I am a Master’s student at Queen’s University working on the PICO experiment utilizing bubble chambers for direct dark matter detection. I have worked on a range of tasks from radiation simulations to particle identification using machine learning. You can often find me in contemporary dance studios or martial arts training mats. One of my wildest dreams is to summit Mount Everest.