Where did 2019 go!? Happy new year everyone, and we all hope your 2020 classes have started off well. We are back and hoping to continue posting now roughly every 2 weeks. We would love to have some more contributors, so consider reaching out to our Editor, Mark Richardson at Mark.Richardson@McDonaldInstitute.ca to see how to get involved. But without further ado, today’s article:

Detecting light dark matter – what, why, and how.

Dark matter detection has been one of the main goals in astroparticle physics research for a few decades now. Most direct detection experiments focus on the detection of weakly interacting massive particles (WIMPs), where they are most sensitive to dark matter masses between 1-100 GeV/c2.  There are good reasons why experiments focus on WIMPs, including their astrophysical implications (read more here: http://www.astro.caltech.edu/~george/ay20/eaa-wimps-machos.pdf).

What about other dark matter candidates? What if WIMPs are not THE answer or THE ONLY answer in this mystery hunt for dark matter?  Shouldn’t we broaden our search space and look for all possible candidates? Indeed, that is what experiments are doing, collaboratively, around the world. Before looking at some of the lightest dark matter candidates, let me remind you of a quote for those who are fans of Sherlock Holmes: “when you have eliminated the impossible, whatever remains, however improbable, must be the truth.” In other words, before they are proven impossible, someone, somewhere will always be on the hunt for these mysterious particles. This article is based on the recent paper by the SuperCDMS collaboration: https://arxiv.org/pdf/1911.11905.pdf. I will briefly introduce their detector configuration, and the particles and signatures they are looking for, as well as their latest constraints.

The SuperCDMS collaboration uses cryogenic germanium and silicon as a target material for possible interaction with a WIMP. Two detector designs have been considered: high-voltage (HV) and interleaved Z-sensitive Ionization- and Phonon-mediated (iZiP). The high-voltage design can reach ultra-low thresholds (10s of eV), but they are only sensitive to phonons. The expected signals in the following sections rely on couplings to electrons (and the ionization signal), thus the iZiP detectors are used in the search for those particles. The detector configuration is shown in Figure 1. 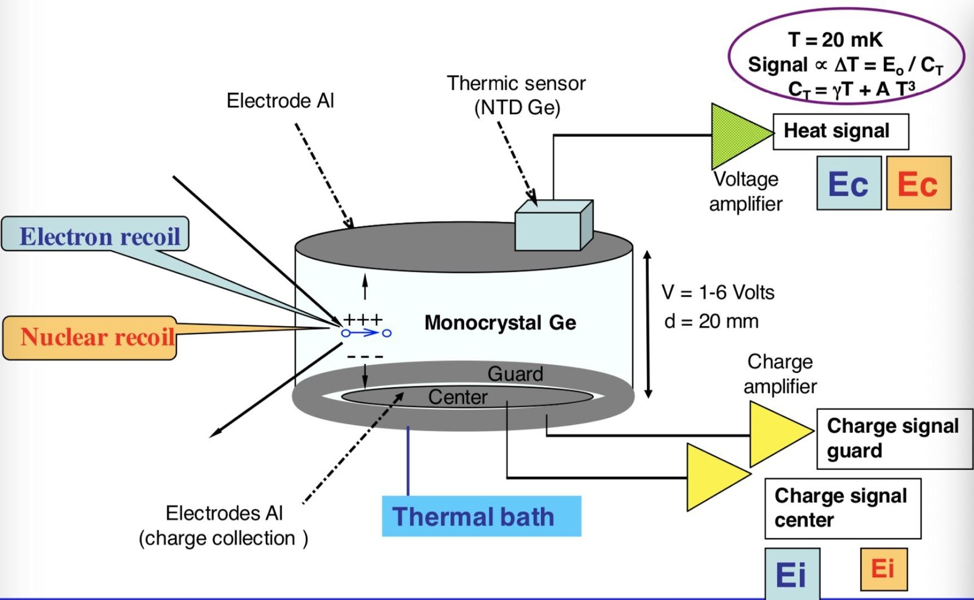 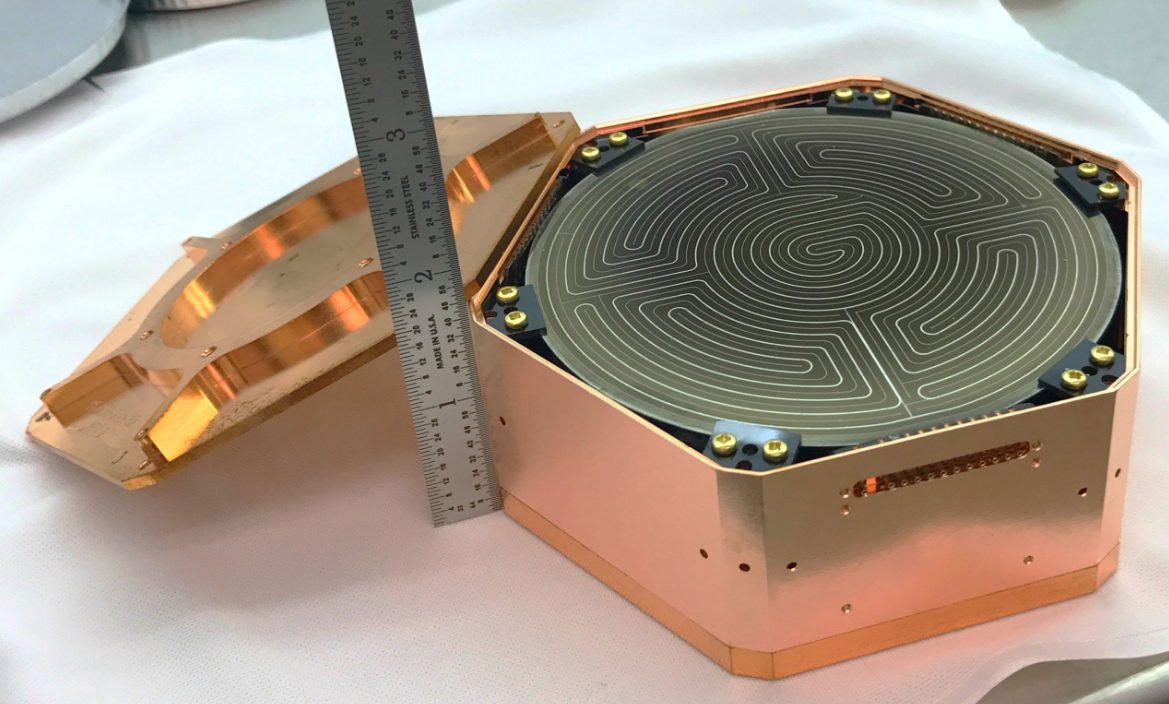 The yield, Y, defined as the ratio between ionization signal and heat signal, is used to distinguish electron recoil events from nuclear recoil events, where the former is expected to produce more ionization signals. The yield is given by, Y = Eq / ( Et – EqeV/εeh), relating the measured charge and heat signals, Eq and Et, respectively. The additional subtraction from Et reflects the fact that every time a phonon signal is produced, there is some charge being liberated due to the applied bias voltage V, with an average energy to liberate the charge given by εeh.

The detector is cooled to ~30mK, reaching sensitivity to dark matter masses as low as a few eV/c2.

The traditional axion, a pseudo-scalar particle that had been postulated to potentially solve the strong CP problem (much like how the Higgs boson couples to fermions in electroweak interactions, the coupling between the hypothetical axion and quarks in the strong interaction ensures a non-zero quark mass), has a mass constraint of ~10-2 eV/c2 set by astronomical observations. In conventional direct detection experiments, designed to be sensitive to WIMP (~10 GeV/c2) scattering, these axions are too light to cause a signal above the detection threshold. There are experiments that specialize in detecting them through axion-photon couplings, I encourage you to read more here https://alps.desy.de/ and here https://arxiv.org/pdf/1707.05312.pdf.

However, axion-like particles (ALPs) do not have such constraints. The expected signature in the SuperCDMS detector involves a coupling between ALPs and electrons, where the absorption of an ALP subsequently causes the ejection of an electron from the target nucleus, much like the photoelectric effect (they call it axioelectric effect in this case). The cross section can be represented as: σa ~ (gae2/βa)σpeE2a(1 – β3a/3)2, where gae is the coupling strength between the ALPs and electrons, Ea is the energy of the ALP, and βa is the relative velocity of the ALP. This leads to an expected interaction rate depending on the axion mass, ma, given by: Ra = (ρX/ma)σaβac, where σa and βa are the axion cross section and velocities, respectively.

So given these rate predictions, the experiment data can be used to set limits on these two parameters, ε and gae. What the detector looks for is a peak in the energy deposition spectrum in the electron recoil data corresponding to the total mass of the incoming particle. How do we know then, that the signal observed is not background? Usually, experiments model background levels via simulations, and subtract the observed signal events from the expected background. Any excess is considered as dark matter candidates.

For simplicity, in this analysis, no background modelling is done. This means all electron recoil signals (after basic selection cuts) were considered to be coming from axions or dark photons, yielding an upper limit on coupling parameters, ε and gae. The limits are shown in Figure 3. 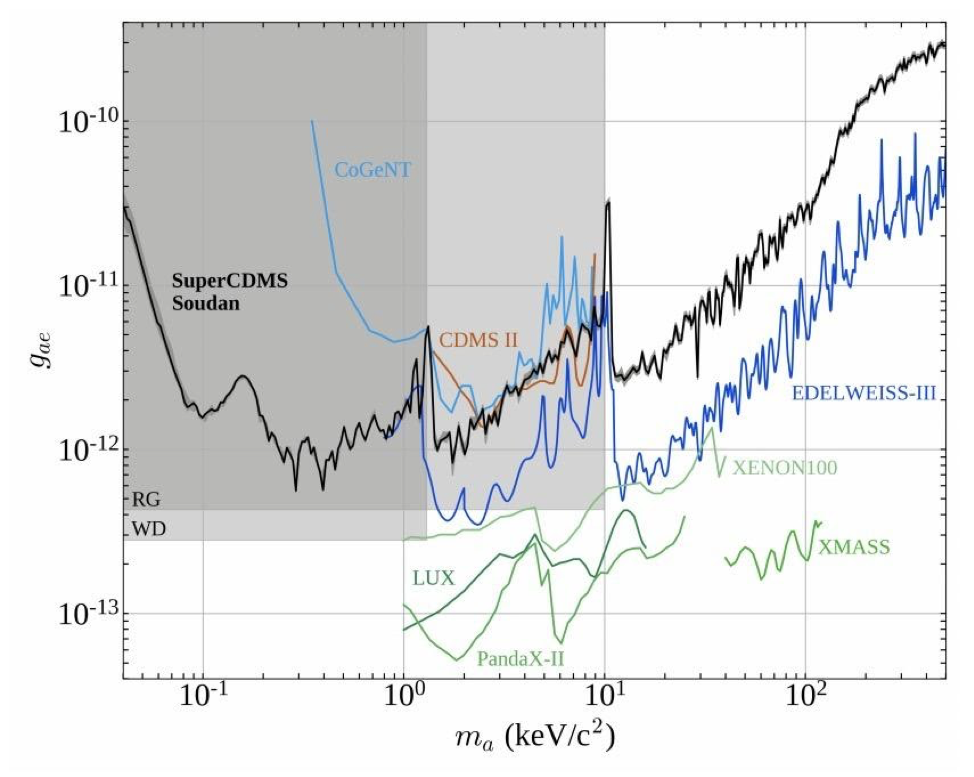 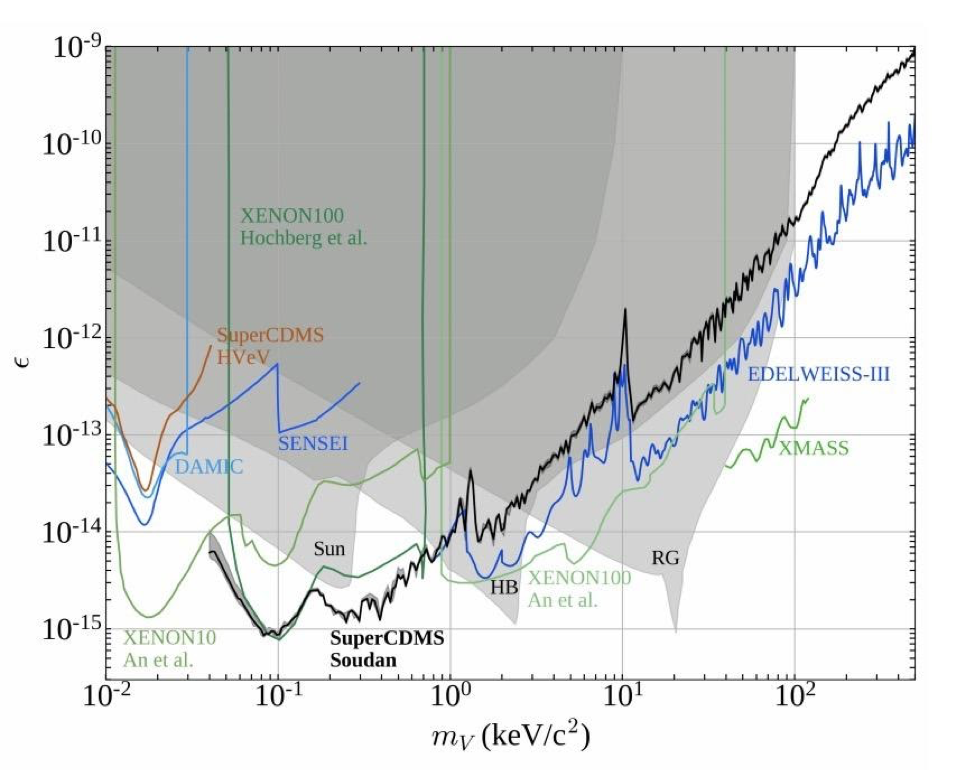 Figure 3 (taken from the paper): the upper limits for the axion-electron coupling strength (top) and the dark photon-photon mixing parameter (bottom) constrained by CDMSlite electron recoil data using iZiP detectors. The limits can be interpreted as: for a particular axion or dark photon mass (x-axes), the axion-electron coupling strength (or the dark photon-photon mixing parameter) is at most of the strength given in the plots, as shown on the y-axes.

In the future, as the background is more understood and accounted for, it is possible these limits will be even more constraining. But for now, they are already some of the best constraints on these two parameters for the low-mass cases for dark photons and axion-like particles.

I recently completed my Master’s at Queen’s University working on the PICO experiment utilizing bubble chambers for direct dark matter detection. I have worked on a range of tasks from radiation simulations to particle identification using machine learning. You can often find me in contemporary dance studios or martial arts training mats. One of my wildest dreams is to summit Mount Everest. I am now doing my PhD in Paris.