Queen’s Professor Emeritus George Ewan passed away on Dec. 7 after a lengthy illness. He leaves behind a massive legacy as a research community builder in international particle astrophysics and a champion of Canadian involvement.

“George was a pioneer in the first use of a germanium gamma ray detector in a nuclear physics experiment in the 1960’s, initiating a revolution in gamma ray detection in medicine, nuclear physics and industry”, says Art McDonald, a long-term colleague. “He was again a pioneer in the development of particle astrophysics in Canada as the first Canadian Spokesman of the Sudbury Neutrino Observatory. Those of us working in this field owe a tremendous amount to the ground-breaking work of this great scientist and friend.” 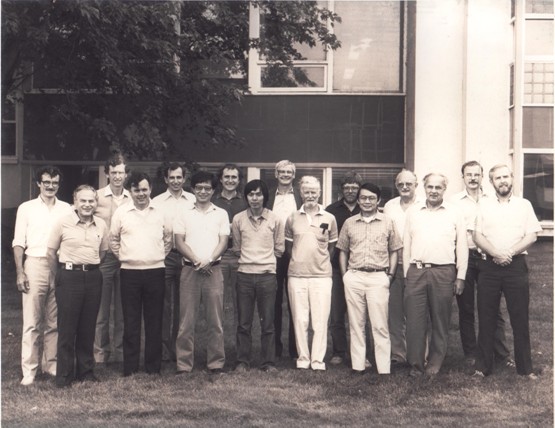 Dr. Ewan’s career in physics began as an undergraduate student in Edinburgh and spanned eight decades of research, teaching and leadership, including a postdoctoral research fellowship at McGill, a 15-year research career at AECL and then a move to Queen’s University in 1970, as an established leader in radiation spectra detection and analysis, particularly as an early innovator in germanium gamma detector useage, for which he received the Radiation Industry Award from the American Nuclear Society. He took an interest in low-background-radiation facilities and the potential to advance particle physics experiments in such environments. He was initially interested in a large mineral oil scintillator detector located underground for detecting rare decays (e.g. proton decay). By 1983, he had already been working with physicists Walter Davidson (NRC) and Ken Lande (UPenn) and regional politicians and federal funders to discuss an underground lab space in Inco’s Creighton mine. Dr. Ewan did not manage to get his initial idea funded, but he continued to promote the Creighton mine’s potential for low-background science and it wasn’t long before Dr. Herb Chen (UC Irvine) and Dr. Cliff Hargrove (Carleton) contacted him about the prospect of using a heavy water detector to address the Solar Neutrino Problem.

Dr. Chen’s key insight in 1984 was that a large body of heavy water was likely to detect both electron emitting and electrically neutral modes of neutrino reaction with a deuterium nucleus. If so, such a detector might solve the Solar Neutrino Problem in which existing neutrino detectors were registering fewer than expected electron-neutrino events.

Drs. Ewan and Davidson later remarked: “By this time we were firmly convinced that Canada could develop a world-class deep underground laboratory, which could make a major contribution to the field, and we concentrated our efforts on developing an international program that could be sited in Canada. We felt that this was a unique opportunity that should not be missed[1].”

Dr. Ewan and Dr. Chen shared responsibility as first spokespersons for the Sudbury Neutrino Observatory Project. Although Dr. Chen passed away in 1987, Dr. Ewan carried on with his Californian partner’s idea to amass more than 1,000 tonnes of heavy water in the Creighton mine detector, working with his former graduate student, David Sinclair, as UK Co-spokesman and Art McDonald and Eugene Beier as US Co-spokesmen. And when the collaboration turned over the directorship of SNO to Dr. Art McDonald in 1990, Dr. Ewan continued to serve the project as a scientific advisor, colleague and tireless promoter including well past his retirement in 1994.

George Ewan was among the recipients of the Breakthrough Prize in Fundamental Physics in 2016 for the Sudbury Neutrino Observatory experiment and was singled out for his role as project initiator in 1984 along with Dr. Chen. There were many other honours conferred on Dr. Ewan throughout his career. He was a winner of the CAP Gold Medal for Lifetime Achievement in Physics, a Sigma Xi Fund of Canada Awardee and a co-winner of the NSERC John Polanyi Award. He was awarded honorary doctorates by Guelph, Laurentian and Queen’s universities. 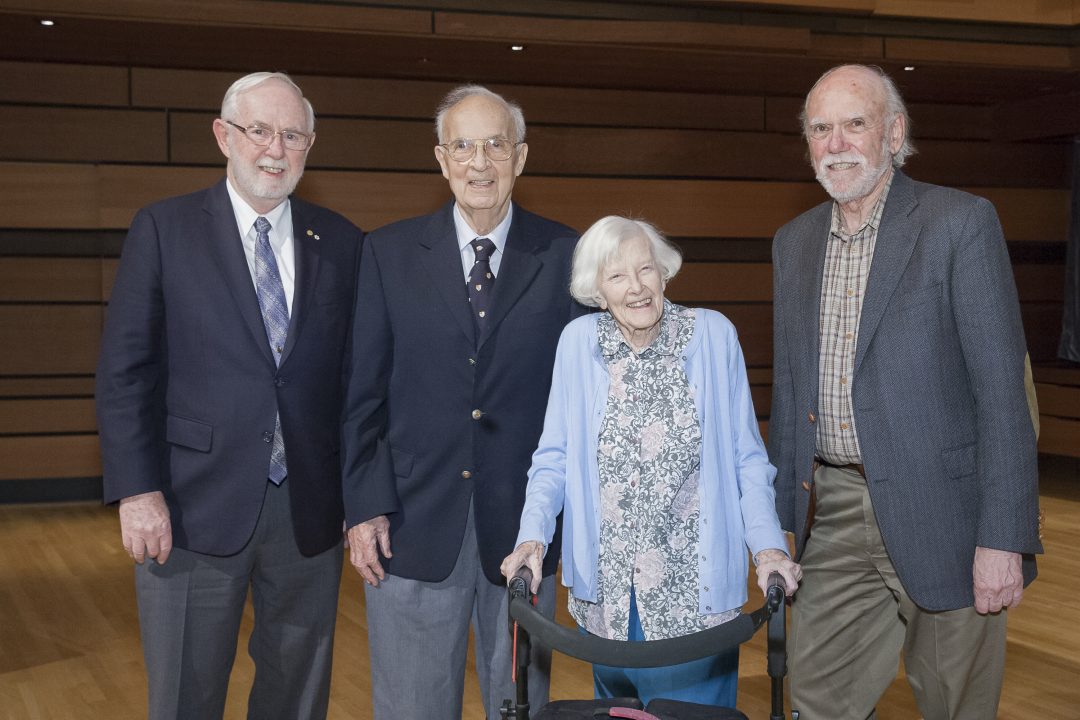 The McDonald Institute was aided by the generosity of George and Maureen Ewan through an endowment fund for the McDonald Institute Ewan Lecture Series. The Ewan Lectures have featured esteemed researchers such as Francis Halzen, David Radford, and Nobel Laureate Barry Barish. While 2020 has caused a delay in the delivery of the Ewan lectures, we look forward to continuing this event series honoring the legacy of George and Maureen. The purpose of this series is to provide an opportunity for world-renowned scientists to come to Queen’s to interact with students, to deliver scientific and public lectures, and to help develop the astroparticle physics community.

There are hundreds of direct and indirect beneficiaries of George Ewan’s tireless effort to build the community of researchers who’ve made Canada an important contributor in astroparticle physics. 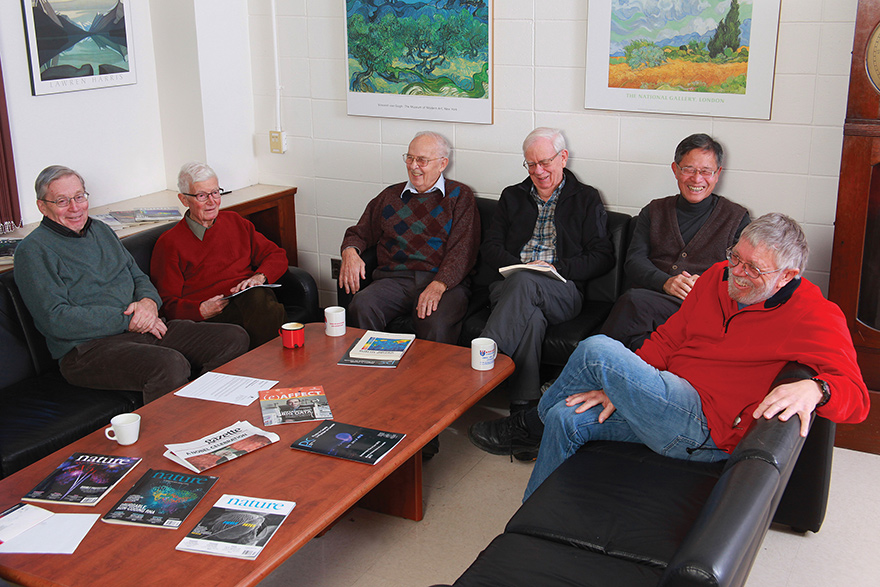 “If you ask around the community of particle astrophysicists in Canada, you encounter scores of stories relating to George’s timely interventions, sage advice and life-changing career suggestions,” says McDonald Institute Scientific Director Tony Noble. “His ability to aspire to a great personal vision and his adaptability, humility and intelligence in adapting that vision to the best-possible scientific opportunity has been monumentally important to research.”

“The McDonald Institute’s mandate is to continue building Canada’s community of particle astrophysicists and its overall ability to engage, adapt and commit in the best interests of scientific excellence. In that sense, we can imagine ourselves as trying our best to follow in the direction that George led us for so many years.” 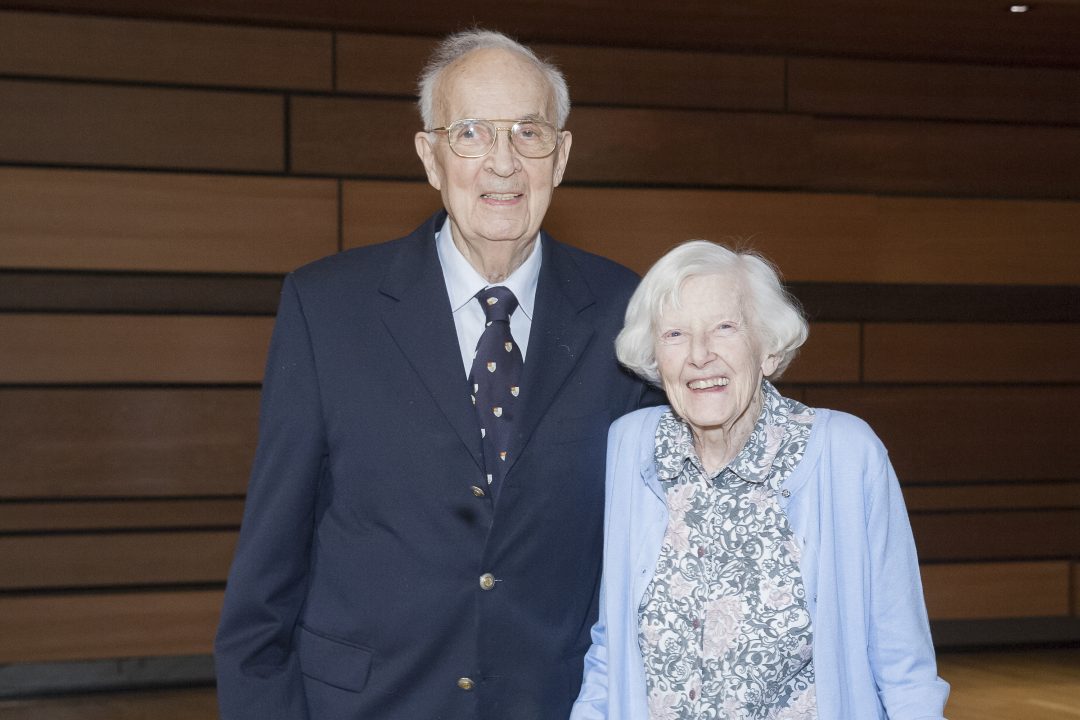 The Queen’s University Gazette memorial can be viewed here: https://www.queensu.ca/gazette/stories/queen-s-remembers-professor-emeritus-george-ewan

If you would like to contribute any stories, anecdotes, images, or other material to this memorial page, please contact communications@mcdonald.institute.ca.