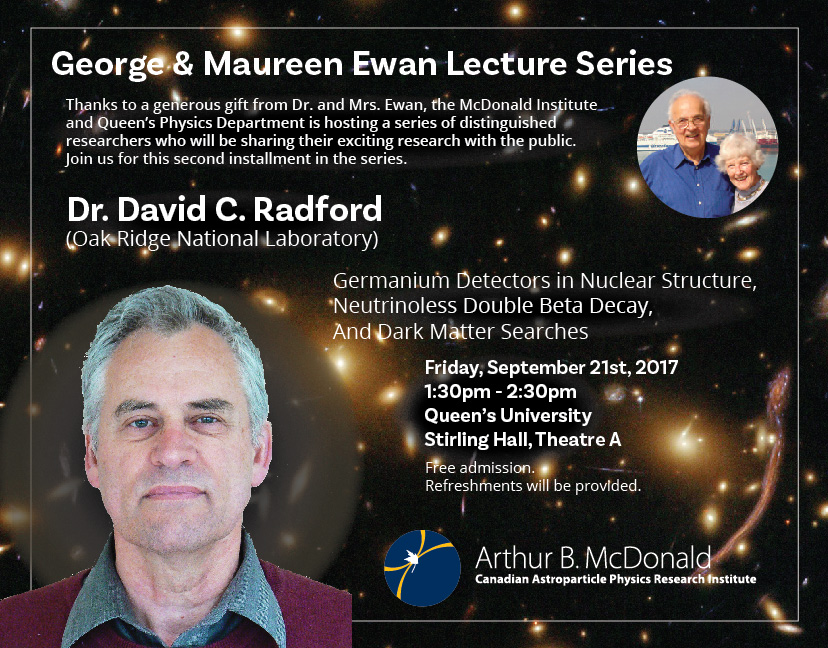 Dr. David Radford is a Corporate Fellow and Group Leader at the Oak Ridge National Laboratory in Oak Ridge, TN. He has contributed a number of innovations that have changed the field of gamma-ray detection. He is also a world leader in the field of germanium detector development and plays a lead role in the Majorana collaboration, an experiment whose purpose is to take a first step towards observing neutrinoless double-beta decay in germanium-76.

Germanium semiconductor detectors have become the “gold standard” for measuring the energies and intensities of gamma rays. With unsurpassed energy resolution and well-understood response, they have evolved from the early Ge(Li) detectors of a few cm3 (developed by George Ewan and others) to today’s hyper-pure Ge detectors with volumes up to 600 cm3. They have become the work-horse of radio-assay, beta decay, in-beam nuclear structure experiments, and even used for gamma-ray astronomy. In recent decades, new operating modes for Ge detectors have also enabled their use in the search for Dark Matter.

The development of Ge detectors, and of large arrays of such detectors for nuclear physics experiments, will be discussed, together with some of the principles behind their operation. I will then present some recent developments in novel systems, focusing in particular on applications for in-beam spectroscopy and searches for neutrinoless double beta decay and dark matter.